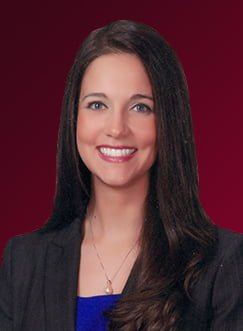 Nicole LeBoeuf Whitaker obtained her Bachelor of Business Administration from Belmont University in Nashville, Tennessee in 2009, graduating with honors. After graduation, she spent a year working for Free for Life International, a non-profit organization dedicated to the fight against human trafficking. This enhanced her passion for helping others and led to her decision to become a lawyer. Her desire to attend a Christian law school led her to the Regent University School of Law in Virginia Beach, VA; where she graduated in the top twenty percent of her class in 2013.

While in law school, she continued to devote a lot of her time and attention to the fight against human trafficking and worked to amend the Virginia and Tennessee state human trafficking laws. She also interned for a year at the U.S. Attorney’s Office and assisted with the prosecution of Somali pirates. After graduation, Nicole worked as an Assistant State Attorney in Leon County prosecuting misdemeanor and felony cases. Nicole now focuses her practice on wills, trusts, estates, guardianships, and probate law and she is an “of counsel” member of the firm assisting in civil litigation.She is still a devoted advocate in the fight against human trafficking, is a member of the Big Bend Coalition Against Human Trafficking, and has worked to amend Florida’s civil human trafficking laws

Nicole’s husband, Nick, is an accountant and they have two little girls, Isabel and Sophia.